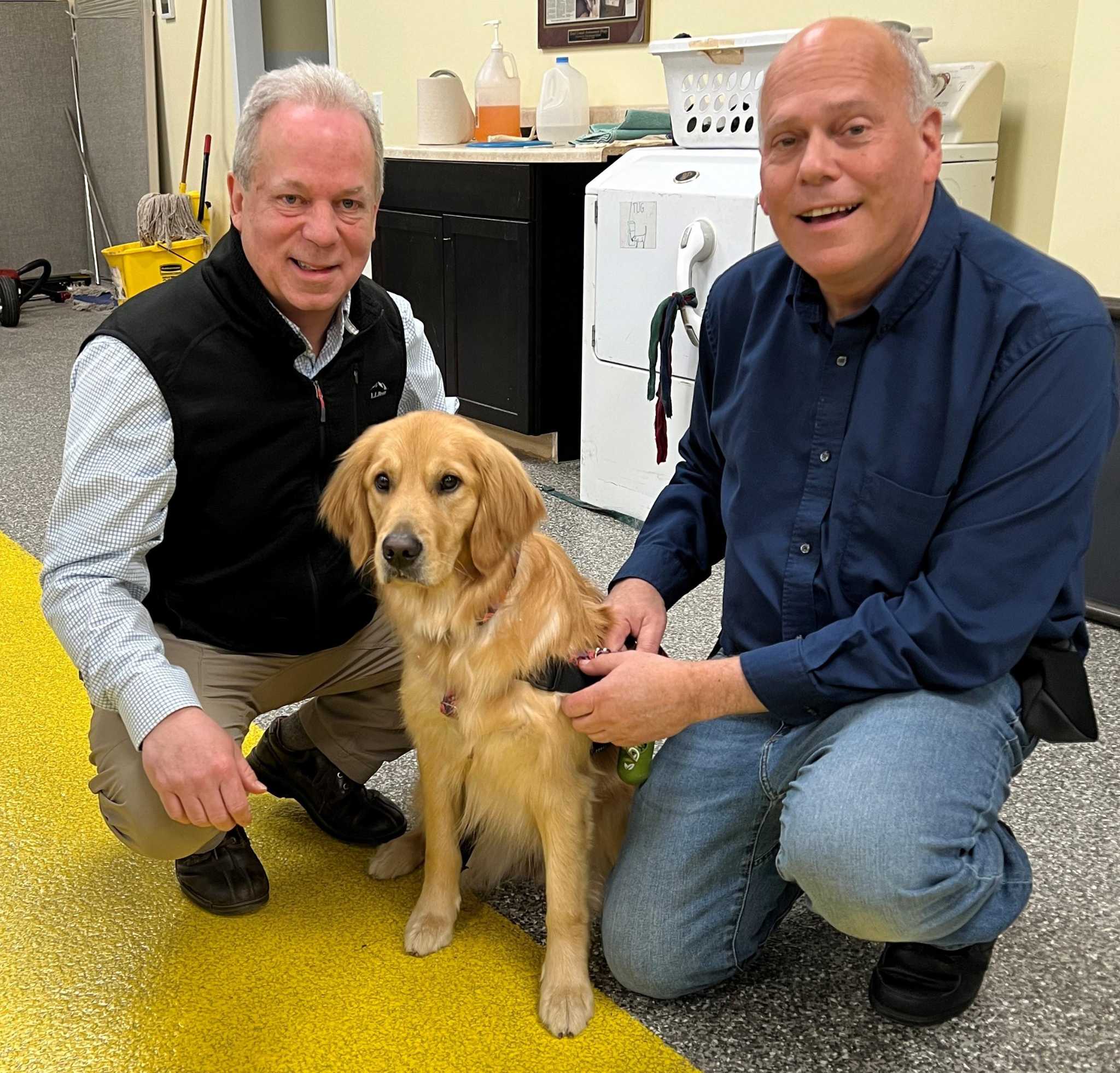 BROOKFIELD – The Christian Counseling Center of Greater Danbury has welcomed a furry addition to its staff – a pup named Apricot.

The nearly 2-year-old golden retriever hails from Educated Canines Assisting with Disabilities – a Winsted-based nonprofit, also known as ECAD, which breeds and trains dogs to help people with disabilities and other needs.

With Barrett as lead dog handler, Apricot will join fellow dog, 5-year-old Olympic, in comforting those in need at the Brookfield counseling centre.

Olympic – also known as “Ollie” – has been with the center since December 2018 and is also an ECAD golden retriever.

“Ollie has worked with the military and been in one-on-one sessions,” said Barrett, who facilitates bereavement support groups at the Christian Counseling Center. “Apricot will also do individual session work and also participate in some of the groups I lead.”

“Organizations like nursing homes and schools have asked dogs to visit in an effort to help people,” he said. “As the COVID restrictions lift further, we can start doing that again.”

The growing popularity of Olympic led the Christian Counseling Center to seek a second dog from ECAD.

“There was starting to be a big demand,” Barrett said. “We wanted to get a second dog, so we reached out.”

He said acquiring a dog from ECAD is a long process, involving fundraising, putting on a waiting list and training dog handlers.

“You have to be certified as a handler to have the dogs, and there’s a training process that happens after the dog’s training is completed,” said Barrett, who has completed a handler training program. -dog at ECAD.

“We need to be trained to be able to execute all commands correctly and consistently so the dogs can be as good as they can be when they’re on the job,” he said.

Another part of the process is finding a good fit, according to Barrett, who said he and Johnson “tried a few dogs” before Apricot.

Unlike therapy dogs, facility dogs like Apricot and Olympic are trained to serve “one to many people,” Barrett said.

“Even though I’m a manager for Apricot, she’s going to serve a lot of people,” he said. “Their training is less about learning the commands needed to help someone in a wheelchair or pushing automatic door openers… and more about teaching the human how to access the training the dog has received so they can live together.”

Barrett said he was thrilled to have Apricot on board and looked forward to working with her to help those seeking help through the Christian Counseling Center.

Biden slams Putin as he wraps up Europe trip