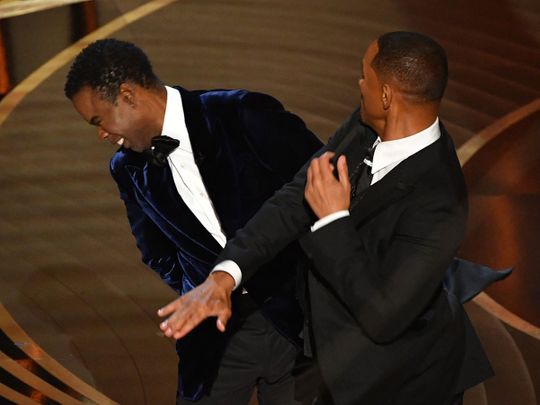 Did childhood PTSD cause Hollywood star Will Smith to slap Chris Rock at the Oscars?

When he was nine, Will Smith writes in his memoir, “Will,” he saw his father brutally beat his mother. It was something that defined him – this fight to never feel so helpless again.

But is it this trauma that also led him to attack Chris Rock at the Oscars when he made fun of Jada Pinkett Smith’s alopecia? Was his discomfort enough to bring him back to his childhood years?

Perhaps. On the US site MedPage Today, a provider of medical information services, psychiatrist Melissa Hankins, MD, writes about how childhood trauma can arise in a variety of circumstances. She adds: “I hope that rather than just vilifying Smith and saying he has ‘an anger problem’, people close to him can help him recognize that he is an anger problem.” trauma problem” and help her get trauma-informed help in the form of therapy in combination with modalities such as Emotional Freedom Techniques (EFT or ‘tapping’), desensitization and movement reprocessing (EMDR), or other somatic modalities that can efficiently and effectively release traumatized aspects held in memory and body.

While the jury is out on what constitutes childhood trauma, Dr Waleed Ahmed, Consultant Psychiatrist at Priory Wellbeing Center, Abu Dhabi, explains: “The new Diagnostic and Statistical Manual of Mental Disorders (DSM-5) definition of the American Psychiatric Association is more inclusive of the different types of traumatic events which include:

“This includes first-hand, witnessing, direct knowledge of a close family member or friend who has experienced repetitive and extreme trauma or exposure to distressing and aversive details of a traumatic event.”

The fallout from these events can be called post-traumatic stress disorder or PTSD. Dr. Ahmed states: “PTSD is essentially a psychological state following a traumatic event, characterized by distress, re-experiencing parts of the event, as well as symptoms of hyper-arousal, avoidance and some degree of emotional blunting.

PTSD is essentially a psychological state following a traumatic event, characterized by distress, re-experiencing parts of the event, as well as symptoms of hyper-arousal, avoidance behaviors and some degree of emotional dullness.

Is there a time frame for PTSD to present itself?

“Typically, symptoms appear a few months after the traumatic event and previous classifications would limit it to the first six months, but would also consider symptoms occurring after this time in other diagnoses related to personality changes. The DSM-5 includes people who may develop symptoms months or even years after the event, recognizing that PTSD symptoms may take time to manifest.But even in people who have shown symptoms later in life, there is almost always a history of less severe symptoms immediately after the traumatic event,” says Dr. Ahmed.

He explains that in the case of a toddler with PTSD, he or she will cry hysterically when he sees his parents fighting or talking loudly.

Other reactions when a child has PTSD

What is the impact of a traumatic event on the brain development of a child?

Dr Khan explains, “When a child is going through a traumatic episode that doesn’t necessarily cause PTSD like an adult fight or an accident, or being one of the receivers like being beaten by their parents or even yelling, it can also have an adverse effect. on a child’s development. This increases the production of cortisol, a stress-related hormone, which affects the part of the brain known as the hippocampus, causing it to shrink in size. This affects their memory and emotional processing functionality.

When a child goes through a traumatic episode that doesn’t necessarily cause PTSD…it can also have a detrimental effect on the child’s development. This increases the production of cortisol, a stress-related hormone, which affects the part of the brain known as the hippocampus, causing it to shrink in size. This affects their memory and emotional processing functionality.

Dr Ahmed says: “Researchers and clinicians also note different types of trauma in terms of their presentation over time – a type of trauma is a discrete, sudden, dangerous and isolated event of limited duration (such as a disaster); the other type includes sustained and repeated stressors that are variable, multiple, and chronic (continuous abuse). Although not a diagnosis, “complex PTSD” or “complex trauma” is often described in survivors of various types of prolonged physical and sexual abuse. Symptoms include:

“This type of disturbance is often diagnosed in categories other than PTSD. Therefore, depending on the type of symptom cluster experienced by a survivor of a traumatic event – particularly in childhood – it may impact on how he relates to others in his meaningful and casual relationships.

The CDC says childhood trauma can be treated with psychotherapy, in which the child can talk, draw, play, or write about the stressful event. He adds that behavioral therapy, especially cognitive behavioral therapy, helps children learn to change their thoughts and feelings by first modifying their behavior to reduce fear or worry. Medications can also be used to decrease symptoms.

Childhood trauma influences one’s behavior in adulthood, says Luz Maria Villagras S., a mindful parenting coach, hypnosis therapist and neurolinguistic programming practitioner based in the United Arab Emirates. She says, “Generational patterns are learned from mom and dad; they can be nice, have good communication, so when the child grows up, that’s how they behave with people. In the case of a child with a dysfunctional childhood, the concept of relationship will be negative and chaotic. And they will reflect and project what has been given to them. They will act. They will project what was familiar to them from childhood.

So it’s not so far-fetched to claim that the Oscars fiasco was caused by a flashback; When Smith saw his wife’s trembling face, he may have remembered his mother’s pain-streaked expression that night when he was nine. It may have caused a knee-jerk reaction that he’s sure to pay for — not just in terms of a 10-year Oscar ban or burned bridges in the industry, but also, unless he gets help, it will take a heavy toll on his sense of identity.

Do you have a topic you would like us to cover? Email us at [email protected]

Do you think your child is depressed? Here’s what the World Health Organization recommends