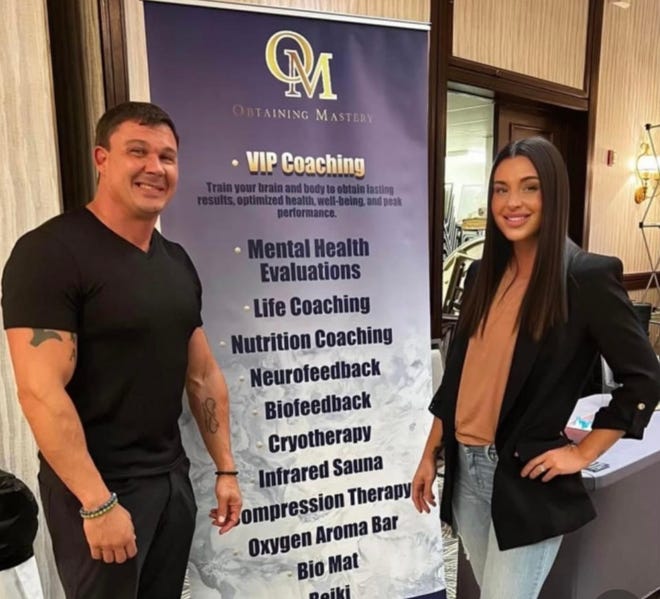 NORTH FALMOUTH — When Joseph “Joe” F. Kelley III takes the mic at a community event he hosts about addiction and recovery on May 29, some in the audience may remember him as a Falmouth High School football star turned disgraced ex-Mashpee cop.

What Kelley hopes attendees of the ‘Breaking the Chains: Addiction and Mental Health’ event at the Sea Crest Beach Hotel will see before them a person who has recovered from an opioid addiction to live a life he loves – and who can help inspire others to do the same.

“It’s my hometown. I wanted something in Falmouth,” said Kelley, 46, who lives in Parkland, Fla., with his wife, Maritsa Yzaguirre-Kelley, a psychologist who is co-hosting the event with Kelley.

The one-day event begins with a memorial 5K and free expo with recovery and mental health center vendors, followed by an evening gala with speakers including Kelley and Chris Nilan, a former Bruins player recovering from alcohol and drugs.

“If you can help one person, that’s a lot,” Kelley said. “Maybe if I recover loudly it will help prevent someone from dying in silence.”

Coming from a family of first responders – his father was a firefighter in Falmouth, his uncles members of the Mashpee Fire Department and the Brockton Police Department – ​​Kelley never imagined he would one day run a welfare center be or would work to connect others with mental health and substance abuse treatment.

Nor could he have foreseen that an addiction to pills and then heroin would derail his career in law enforcement.

Entering the police academy shortly after graduating with a bachelor’s degree in sociology from Hartwick College in New York in 1999 meant he was “fulfilling a lifelong dream,” Kelley said.

“It was exhausting. I liked it.”

Kelley was up for the challenge. Physically fit, with leadership skills to spare, he had been captain of the baseball and football teams and football quarterback at Falmouth High School, from which he graduated in 1994.

Like many footballers, he had some issues with his meniscus, the cartilage in the knee that acts as a shock absorber between the shin and thigh bones.

His first meniscus surgery just before he entered the police academy went smoothly.

But the second surgery, which took place around 2007 or 2008, helped send Kelley into an addiction to painkillers.

Kelley said he twisted his knee while fighting with someone during an arrest.

But by then he was also grappling with the demands of the job, including devastating images of car crashes, suicides and deaths in cribs.

“I kept stuff inside,” Kelley said.

Married to his first wife, he worked nights and spent the day with their two children.

But he wasn’t really in touch with his family, Kelley said.

The stress of work “made me distant”, he said. “I was just always tired, exhausted. So I don’t manage any of my emotions.

His surefire stress reliever was training and exercising, including playing softball.

Kelley said he decided to shorten his surgery recovery time in order to get back on the playing field by taking painkillers, including Percocet and Oxycontin.

The medical providers “gave me everything I wanted,” Kelley said.

Then he injured himself again and took even higher doses. The pills also helped him cope with flashbacks and fatigue.

“I just knew that when I didn’t have something in me, I felt worse than ever,” he said.

Eventually, the insurance company caught on, and Kelley began buying pills from friends and then buying them directly, through her family’s bank account.

“It went pretty badly. I needed more and more to be okay, to feel like a normal human being,” Kelley said.

Opinion:A letter to the children of Cape Town and their parents. Please share it widely.

Mashpee City Manager Rodney Collins, who was then Mashpee Police Chief, noticed something was wrong and contacted Kelley.

“All I heard was, ‘Tell me everything you know so I can fire your a-,'” Kelley said.

Kelley resigned from the force, bounced in and out of rehab, and received a restraining order when his wife left him and took the kids.

While feeling “completely and utterly alone”, Kelley met a woman in rehab with whom he started using heroin.

“The pills were too expensive and they started to get harder to get. Heroin was cheaper and stronger.

Kelley ran out of credit cards and turned to selling drugs.

In May 2009, just three months after resigning from the Mashpee Police Department, Kelley was arrested by Barnstable police and charged with drug trafficking after detectives allegedly found 200 oxycodone tablets, along with other substances. , at his home in Cotuit.

Kelley pleaded guilty to a reduced charge of distribution and was sentenced to 2½ years in Plymouth Reformatory, of which he served 19 months.

As humiliating as it was, the sentencing likely helped save his life, Kelley said.

“Prison gave me the time I didn’t want to give myself. It was the first time in my life that I couldn’t manipulate my release.

Kelley got sober, participated in a prison recovery program, and enjoyed the protection of cellblock comrades, who claimed not to know about who other inmates were shouting “5-0!” were talking.

“I surrounded myself with the best people possible in a place like this. It was not easy,” he said.

Life after prison for Joe Kelley

Released from prison, Kelley got a job as a landscaper, then worked as a consultant for Gosnold in Falmouth, where program director Martha Jaxtimer helped keep him on the road to recovery.

“I didn’t always listen, but she was always there unconditionally,” Kelley said.

He moved to Florida in 2013 after a boat trip led to the drowning death of a close cousin.

“That was it for me in the state of Massachusetts,” Kelley said.

In Florida, he worked in treatment centers, met his second wife, who holds a doctorate in psychology, and trained in various healing modalities, including hypnosis and neurolinguistic programming.

He recently joined his wife to run the OM Center for Wellness in Parkland, Florida and Obtaining Mastery, a personal development company that certifies others in practices such as Neurolinguistic Programming, Emotional Freedom Technique, Hypnosis and life coaching.

“He’s really involved in our follow-up. He helps them, guides them,” said Georgina Felix, president of CWA Local 3140.

“I can’t tell you what it’s like to have a cold sweat. I have never walked that. The best support is someone who has it,” Felix said. “Joe helps them in their cold sweats, when they freak out.”

It also checks that people with mental health issues are coming to their appointments, Felix said.

“When that person is struggling in the middle of the night, he’s my trusted man. He gets them off the ladder. He helps us keep them on track,” Felix said.

Kelley said that while the 12-step program is essential to his recovery, he also practices a variety of alternative healing practices that would have earned him a skeptical eye during his law enforcement days.

“I’m actually a kids yoga instructor,” said Kelley, who has three children with Maritsa. “Everyone is a little confused.”

“I never stopped looking for different ways to improve myself,” he said.

Rodney Collins, the Mashpee town manager who knew Kelley when he was police chief, said, “I think he’s the ultimate recovery story.”

“I’m very impressed with how he turned his life around. People who are in a bad place shouldn’t just listen to his story, but they should hope they can do something similar,” he said.

What to expect from “Breaking the Chains: Addiction and Mental Health”

The slate of speakers for May 29 includes those who offer practical advice on how to get a loved one into an addiction treatment center and what to look for in addiction recovery programs.

The event’s $300-ticket gala evening has drawn 130 attendees so far, including members of law enforcement and the local recovery community, Kelley said.

Kelley said 10% of any proceeds remaining after “Breaking the Chains” hosting expenses will go to two charities: Irish Angels, which benefits first responders struggling with mental health and addiction issues, and Wondherful, a suicide prevention organization.

Kelley also said he’s writing a book, which he hopes to release in August, about his experiences called “Badge, Bars to Beyond.”

The event is being filmed by documentarian Jeff Hays for a docuseries, “Addiction Revealed,” which Kelley says is set to launch in August.

“I love doing what I do,” Kelley said. “I love a comeback story.”