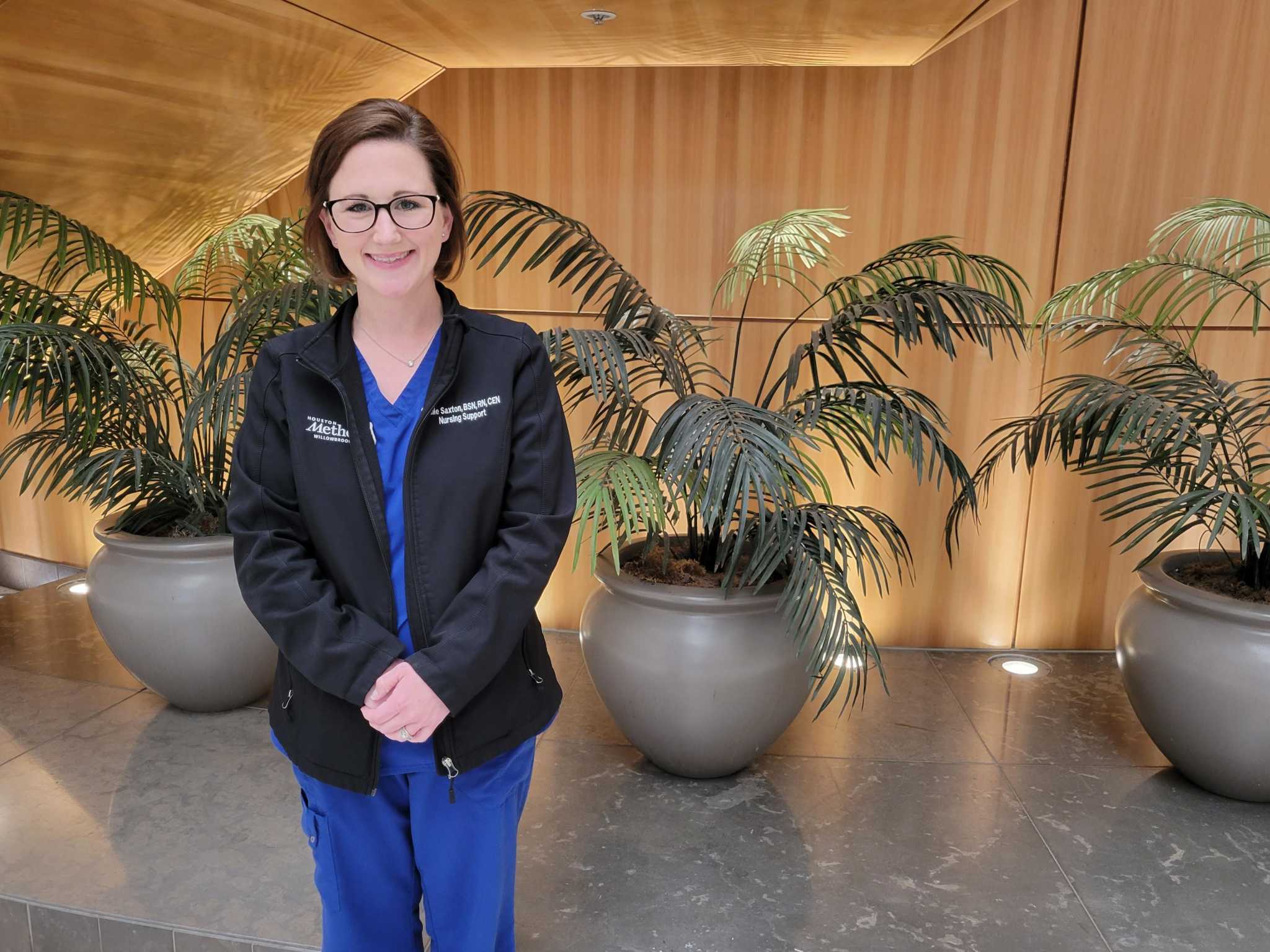 Around 9 a.m., Callie Saxton answered a call. On the other end of the line, she heard her mother’s voice: “Come down now, you have an interview.

Saxton had barely begun her job search after graduating from nursing school at the University of Texas at Tyler.

At the time, her father was a patient on the main campus of Houston Methodist Hospital. The proud dad had spoken to the unit director about his daughter who just passed the NCLEX.

‘From Fear to Courage’: Tomball nurses reflect on the challenges of the past two years

“(The manager) said, ‘Well, we’re having a hiring event today, tell him to come,'” prompting his mother’s abrupt morning call.

“I had just woke up…and I was like, ‘What? I didn’t even know I had applied there yet,” Saxton said.

Shortly after the call, she was on her way to downtown Houston.

The impromptu trip was well worth the effort.

“I actually ended up being hired in one of the medical surgery units – the post-operative unit,” she said.

More than a decade later, Saxton is still working in the Houston Methodist system, now at Willowbrook Hospital where she has been since 2016.

“And I have no intention of leaving at all. This is my home,” she said.

Saxton – a floating pool nurse able to serve on multiple units in the hospital – has worked in the intensive care unit and the emergency room for most of her career.

However, with the onset of the pandemic, its role began to evolve. Saxton’s contributions to Houston Methodist Willowbrook over the past two years have proven invaluable and won praise from hospital leaders.

On HoustonChronicle.com: Northwest Houston hospitals expand as they continue to adapt to pandemic

“She’s a nurse who went above and beyond clinically and administratively she really kept us organized,” said Nicole Twine, Vice President and Chief Nursing Officer. of Houston Methodist Willowbrook.

When the hospital needed someone to help track the COVID patient in the early stages of the pandemic, Saxton answered the call.

“We needed to know where these people were going to the hospital. That way we could kind of group the nurses together, reduce the risk of exposure, protect our vulnerable patients,” Saxton said.

An influx of patients has resulted in the addition of agency staff and new hires. Once again, Saxton stepped in.

Before the pandemic, Saxton said the hospital didn’t have a lot of agency staff.

“Being a loving hospital, we try to keep our core staff,” she explained.

“But COVID hit everywhere and staffing started to take a turn. … Luckily we haven’t been hit as hard as I know part of the country has been with staff,” Saxton said.

As a liaison with the agency, Saxton helped recruit, vet, and onboard new staff. She and the education department provided orientation and ensured that new nurses had the resources to provide quality care.

“Even though that wasn’t the role we hired her for, she immediately took on that role, and even though she wasn’t an official leader, she’s definitely been an informal leader for the past two years. “Twine said. “He’s someone who was really able to organize and partner across the system to find those resources to support our team when we needed them the most.”

Although Saxton did not work directly with COVID patients, she saw firsthand the challenges bedside nurses faced during the pandemic. She recalls the surreal experience of walking into the intensive care unit and seeing nurses fully kitted out in protective gear.

One of the main challenges for nurses, she said, was fear of the unknown.

“Not knowing what it really was, not knowing where it was going, when are we going to have our next flare-up, worrying about our loved ones back home, not being able to be with them,” said Saxton, wife and mother of a child of 13 and 4 years old.

To understand the severity of COVID’s impact, Saxton urges people to consider the bigger picture, including its effect on patients and families.

The mental toll of hospitalized COVID patients who could not see their families was important. Hospital stays for many patients were much longer than for other illnesses, such as the flu.

Patients are also faced with the question of the long-term effects on their health.

“We see a lot of people who have sequelae after that,” she said.

From protracted COVID and mental health issues to financial hardship and job loss, the impacts of the pandemic have been many and far-reaching. It’s not “just another flu,” she said.

“You can’t judge something like COVID or a pandemic just based on death rates. … People’s lives are turned upside down in so many different ways that a lot of people just don’t think about it.

The past two years have been filled with challenges, and Twine said nurses across the country have stepped up to meet the needs of their communities.

“When you talk about frontline workers and their value to the organization, nurses have gone above and beyond to care for patients; put themselves in difficult situations,” Twine said.

Each year, the hospital plans special activities during the week to show appreciation to the nursing staff, including luncheons, gifts, and the annual tradition of blessing the hands of nurses in a ceremony performed by the chaplain.

“Every nurse will come and we will bless their hands for taking care of our patients,” Twine said. “During COVID, we weren’t able to get everyone together. I hope this year we will have a better turnout where we can bring together as many nurses as possible. … It’s not a long ceremony, but it’s really just to say ‘we appreciate and we appreciate and we want to bless you for the work that you do.’

The appreciation for nurses at Houston Methodist Willowbrook is not limited to this week, Saxton said. The hospital has supported nurses and other staff in various ways through the challenges of the pandemic.

“When many places furloughed their employees, we didn’t,” Saxton said. “They thought of some really great ways to put people in different jobs and put them into different roles that we normally would never do, and it worked.”

Staff had access to emotional support through counseling services, help with childcare when schools were closed, pet therapy sessions and, of course, meals provided by the hospital.

The community has also shown tremendous support by sending messages of encouragement, donating food and giving gifts to say “thank you” for the sacrifices made by healthcare professionals.

“A couple of times one of the local churches…they were just standing outside the garage with signs and applause and cheers, and it kinda chokes me just remembering that,” said Saxon.

Nursing can sometimes be a thankless job, Saxton said, but serving as a nurse isn’t about accolades or pay.

Appreciation goes a step further by showing nurses that the effort they put into their jobs, the 12 hour shifts, the time spent away from loved ones, the sacrifices, are seen and valued.