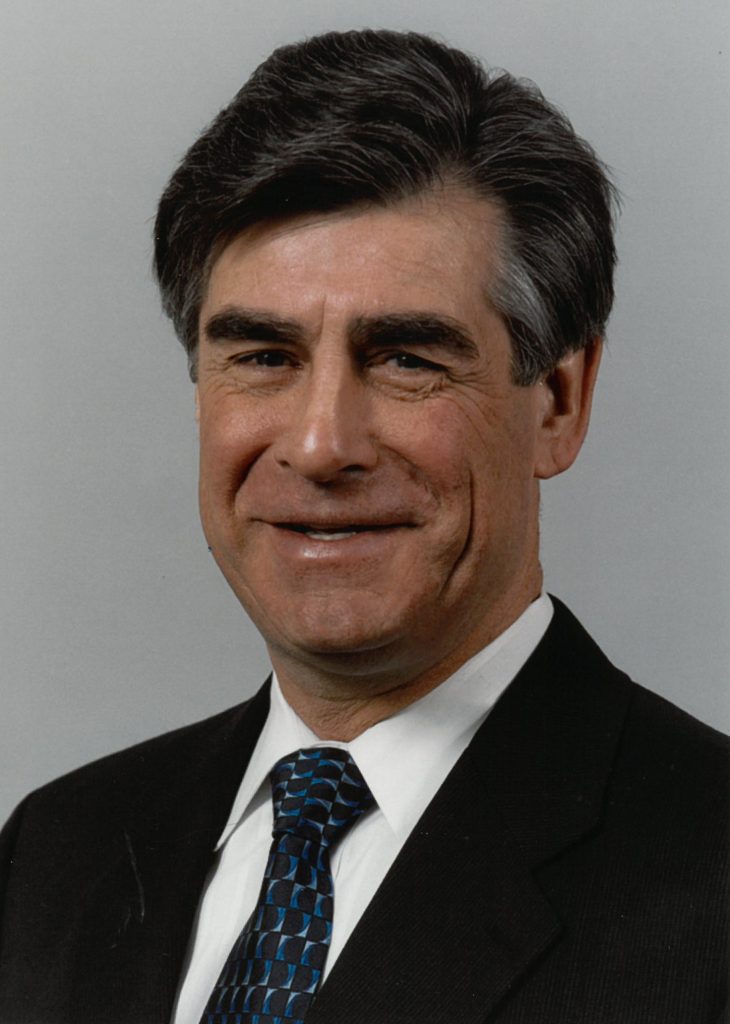 On June 14, 2000, Father William Cleves announced his resignation as President of Thomas More College effective at the end of the following academic year, 2000–2001. Accordingly, the process of finding the twelfth president of the college began. Ted Robinson was appointed by the board to begin the search.

The main objective of the committee was to find candidates who had the strengths of fundraising, collaboration and strong administrative skills. Under Robinson’s leadership, the committee screened dozens of applications that met those criteria. Once the list was sorted and presented to the full board, the second phase of the project began, relying heavily on listening. Listening sessions for administration, staff, faculty and students were all held. The finalists made short presentations and then participants were able to ask questions. Detailed notes were taken and forwarded to the Board of Directors.

Eventually, two finalists came to the fore. One of them was Dr. E. Joseph Lee. Lee has had strong support from board members and mixed support from faculty and staff. He had a long administrative career in higher education but much less teaching experience. After much discussion and debate, the board made the decision to appoint Dr. Lee as President of Thomas More College.

On March 29, 2001, Robinson made the official announcement, stating, “The committee has carefully reviewed many qualified candidates for this position. We are convinced that Dr. Lee is the right person for many reasons. Perhaps the most critical reason is that the opportunities and challenges facing Thomas More College appear to be those that could best be addressed by a President with his experience, expertise and leadership style. Lee would begin his official duties on June 1, 2001. The Kentucky Post quoted Lee, who said, “I am thrilled to take on the presidency of Thomas More College primarily because the mission of the college is one that I can identify with and embrace.”

Dr. Lee was originally from Bath, Maine. He earned his Bachelor of Arts in French Literature and Master of Science in Education from St. Michael College in Winooski, Vermont. Lee’s doctorate in philosophy was from Boston College. Dr. Lee had also attended Harvard University’s Institute of Educational Management. 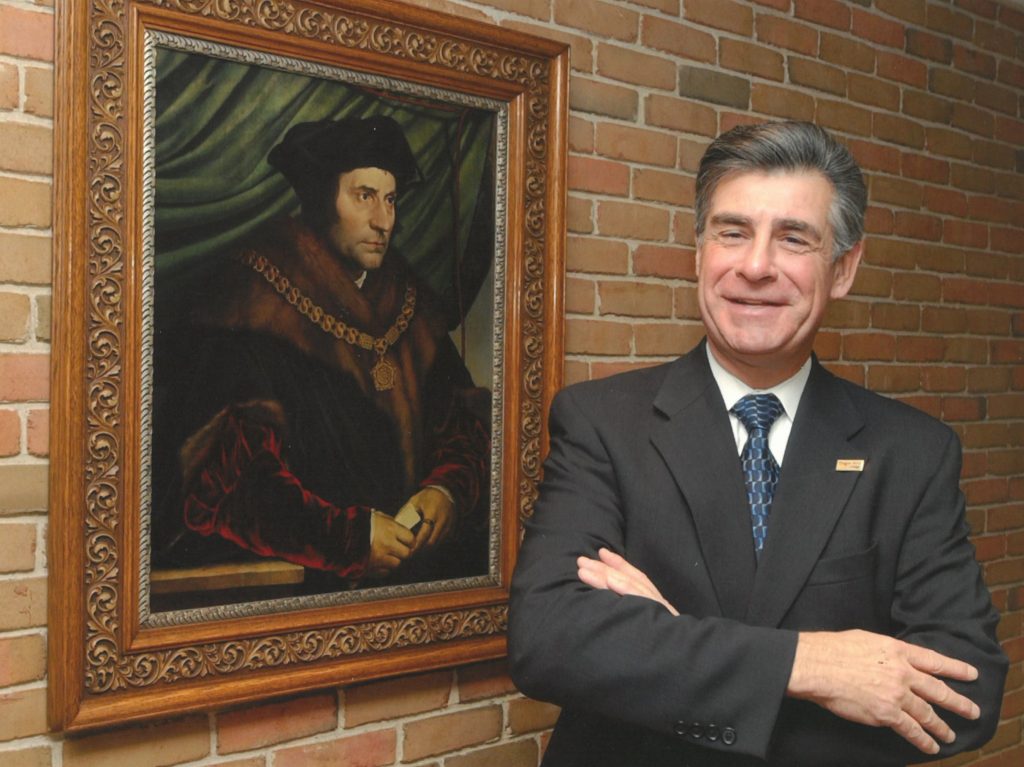 Prior to joining Thomas More, Dr. Lee had a long career in leadership positions in higher education. He began his work in education in Worcester, Massachusetts at the College of the Holy Cross as an Admissions Counselor and later as Assistant Director of Admissions at Assumption College. Between 1974 and 1976, Lee served as Director of Career Counseling and Acting Director of Admissions at Framingham State College in Framingham, Massachusetts. From 1976 to 1990, he served as Dean of Admissions and Financial Aid and then Vice President of Student Services at Merrimack College in North Andover, Massachusetts. His last post before joining Thomas More was Vice President for Student Life at Manhattan College in Riversdale, New York. During his years at Manhattan College, Lee oversaw a 35% increase in student applications and enrolled two of the largest freshman classes in the institution’s history.

The board, for the first time in college history, tied incentives to the president’s contract. Dr. Lee received a base salary and the use of a university-owned automobile and an expense account. In addition, he was entitled to an annual performance-related bonus. He would be evaluated by the board after the completion of his first six months of work and on an annual basis.

Dr. Lee’s presidency proved short. He began his official tenure on campus on June 1, 2001, and served until 2004. Despite the brief stay, he achieved a number of accomplishments that benefited the college.

One of the first issues Dr. Lee faced was the final reaccreditation process with the Southern Association of Colleges and Schools that the college had been working on since the previous year. Working closely with the Vice President for Academic Affairs and Dean of the College, Dr. Dale K. Myers, this was achieved in 2001. Dr. Lee then turned to other issues, including establishing fundraising relationships with community leaders. Many of these relationships ultimately proved fruitful.

Working with several members of the science faculty, Dr. Lee successfully applied for a grant from the National Science Foundation to build an observatory on campus. This funding, coupled with a generous grant from the Bank of Kentucky, resulted in the construction of the new, state-of-the-art Bank of Kentucky Observatory. The building was designed by GBBN Architectural Firm and constructed by Century Construction. An open house to officially inaugurate the new facility was held on June 5, 2003. 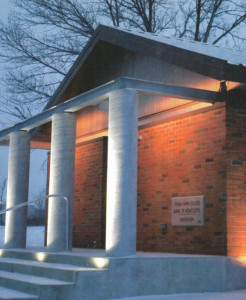 Dr. Lee then turned his attention to the Thomas More Library (now the Benedictine Library). The facility was part of the original 1967 Crestview Hills campus and had received little attention for decades. The 36,000 square foot facility required major electrical upgrades, a new ADA-compliant elevator, more flexible student space, and improved technology. In December 2003, the college received an $800,000 grant from the James Graham Brown Foundation. An additional grant from the Scripps Howard Foundation brought the college closer to its $1.8 million goal. That same year, GBBN Architectural Firm was commissioned to complete a preliminary design.

Dr. Lee did not see the library project completed – that was left to his successor. Disputes with the board, mostly over enrollment management issues, have resulted in a strained relationship. Dr. Lee formally resigned as President of Thomas More College in 2004.

After leaving Thomas More, Dr. Lee returned to his native New England. He later served as president of St. Joseph College in Maine and is currently president of Spring Hill College in Alabama.

David E. Schroeder is director of the Kenton County Public Library. He is the author of Life Along the Ohio: A Sesquicentennial Story of Ludlow, Kentucky (2014), co-editor of Gateway City: Covington, Kentucky, 1815-2015 (2015), and co-author of Northern Kentucky Lost(2018).

We want to learn about the history of your business, church, school, or organization in our area (Cincinnati, Northern Kentucky, and along the Ohio River). If you would like to share your rich history with others, please contact Our Rich History editor Paul A. Tenkotte at [email protected] Paul A. Tenkotte, PhD, is Professor of History and Gender Studies at Northern Kentucky University (NKU) and author of numerous books and articles.

It is 6 p.m. this Sunday in kyiv. Here’s what you need to know