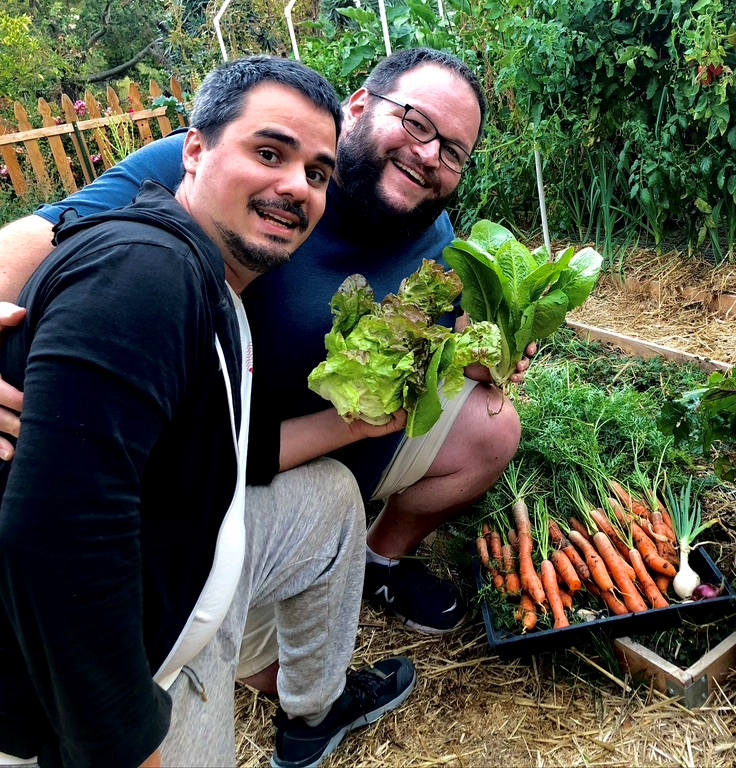 San Rafael permaculturists document their journey to the garden

Move over Martha Stewart, P. Allen Smith and all the other small-screen garden gurus and make room for Jed and Selim, the residents of San Rafael who, for internet privacy, only use their first names.

Jed and Selim are the entertaining creators and hosts of “Late Bloomers Permaculture”, an informative garden series on YouTube.

“Permaculture is essentially an approach to growing food that works with nature rather than fighting it,” says Jed, a Novato native who works as a communications consultant and improv teacher. “Organic is part of it because our goal is to encourage life, not kill it, but it’s a much bigger philosophy than that. The real goal is to produce our own nutritious food in a sustainable and life-friendly way. »

Neither Jed nor Selim, a Tunisian-born neurolinguistic programming life coach and COVID compliance manager, grew up gardening, but after watching a video by French permaculturist Philip Forrer three years ago, Selim says that he “was immediately hooked on the idea of ​​growing my own food.”

Her epiphany inspired Jed, and two years ago they transformed the back lawn of their hillside home in San Rafael into an edible garden that blessed them last summer with 300 pounds of produce.

New permaculture proponents decided to document their garden building—with all its lessons, surprises, humor, and even mistakes—in a YouTube series (youtube.com/Latebloomerspermaculture).

Each lesson focuses on a topic such as “better calling the soil”, “seeding arrangement” and “fencing with advantages”, and generally lasts no more than 10 minutes.

“For me, (the YouTube series) was partly down to creative frustration,” says Jed. “I was a comedy writer and improviser in Chicago for eight years, and then the pandemic hit and I lost all my creative outlets.”

Then his mother died and he needed concentration.

“Right off the bat, I said to Selim, ‘If we do this, it can’t just be another dry, boring gardening channel. He has to have a sense of humor like us. We both love laughing and being a little silly and playful in our daily lives. At the same time, we both knew it wasn’t going to be all comedy. We had to strike a balance between informing and entertaining.

Selim, who is deeply concerned about reducing the global carbon footprint, agreed. “I wanted to show people that we can make a difference, even in a small space and with little experience and that we can have good results and a lot of fun,” he says.

“I discovered that a lot of people think gardening is very difficult, which is not surprising considering that society is disconnected from nature. Our main goal is to educate, but I think humor is a great tool to make everything more doable. I think people learn best when things are fun and playful.

Selim, in particular, appreciates the holistic aspect of permaculture. “When we start to understand the interactions (of nature), we can place each element in time and space in order to maximize these interactions and minimize the work that I have to do. It’s like a fun puzzle to solve to get really lazy and collect a ton.

Jed likes his scientific approach. “Permaculture is about observation and correction. You spend more time observing than digging or planting. Every piece of land is different. Water flows differently. Soil conditions differ. The local flora and fauna differ. So the goal of creating something that fits your conditions by just observing and correcting is really cool to me.

“Some of the ones we grew into multiple varieties and while most grew quite well, a few were on the wrestling bus,” says Jed. “Our turnips unfortunately did not survive the winter, may they rest in peace.”

They started small the first year, but when they discovered that Permaculture Design (permaculturedesign.fr), the French organization Selim had trained with and now a partner in their YouTube series, had released a fully-designed permaculture plan over three years, the two gardeners hit pay dirt.

“Our 750 square foot space was just perfect for that,” says Selim. “Design is really the heart of permaculture.”

They divided their garden into three main areas: annuals, fertility and biodiversity beds.

They support wildlife by leaving part of their natural hillside and providing a birdbath inside the garden.

“We also leave out several plates filled with stones and water to help hydrate our beneficial plants,” adds Selim. “We even have kennels, which don’t look like much – a pile of rocks here, a pile of sticks there – but they’re invaluable in providing a safe habitat for beneficial insects and small animals.”

There is also natural rodent control.

PJ Bremier writes on home, garden, design and entertainment topics every Saturday. She can be contacted at PO Box 412, Kentfield 94914, or at [email protected]

Foremost Life Coach, Olusola will unveil 8 e-books in one day