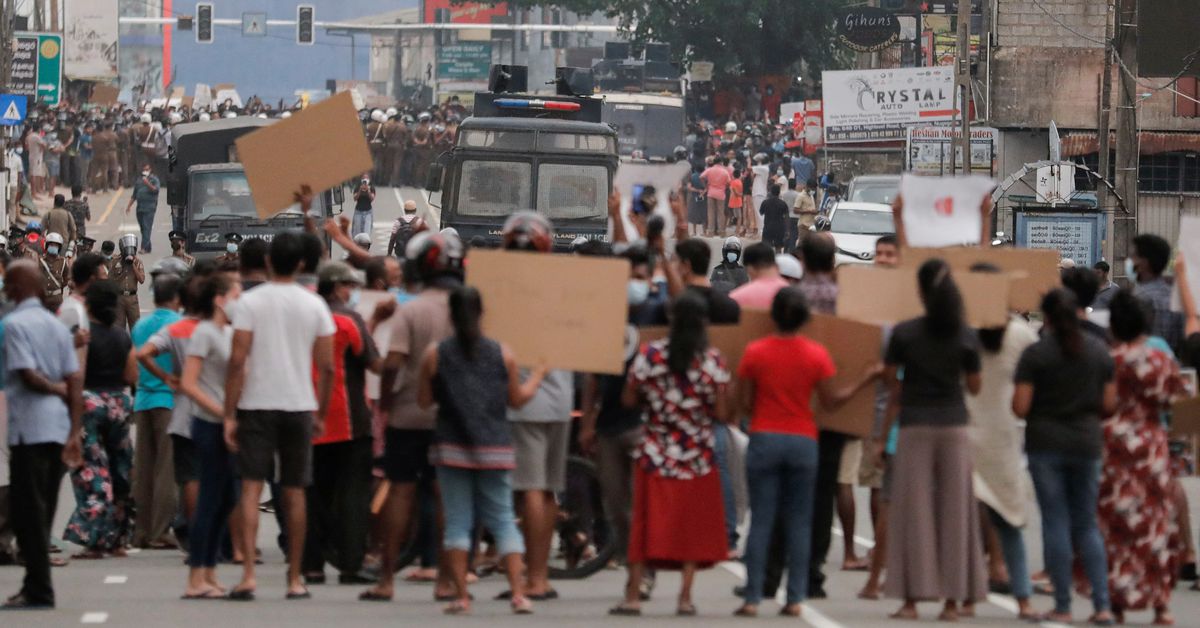 The indebted country, ruled by Rajapaksa and members of his family since 2019, has struggled to pay for imports of fuel and other goods due to a shortage of foreign currency, leading to power cuts lasting several hours and a shortage of basic necessities. Read more

“Protesters broke through two barricades that had been placed near the residence and the police had to use tear gas to drive the protesters away,” police spokesman Nihal Thalduwa said.

Crowds also gathered outside the homes of six lawmakers and the party office of a former minister of state spread across the country, he said.

After many protesters demanded the full ousting of the Rajapaksas, the president’s media office said in a statement that four new ministers had been appointed “to ensure that parliament and other tasks can be carried out lawfully until ‘that a full Cabinet can be sworn in’.

The president’s nephew has resigned as sports minister in the disbanded government while the governor of the Central Bank of Sri Lanka (CBSL) has offered to resign. The CBSL delayed its monetary policy announcement scheduled for Tuesday.

Former CBSL official P. Nandalal Weerasinghe said on Monday that he had accepted an offer from Rajapaksa to become the next governor of the central bank.

“The president called me and made the offer, and I accepted,” Weerasinghe told Reuters.

The president’s media office says Justice Minister Ali Sabry has been named finance minister, replacing Basil Rajapaksa, the president’s younger brother, who was due to travel to Washington this month for talks. with the International Monetary Fund (IMF) on a loan program.

The Ministers of Foreign Affairs, Education and Roads will retain their posts.

“The president invites all political parties represented in parliament to come together to accept ministerial portfolios in order to find solutions to this national crisis,” the media office said.

Udaya Gammanpila, leader of one of the 11 political parties that make up the ruling coalition, called the new Cabinet “an old wine in a new bottle”.

“Our demand is that a multi-party caretaker government restore essential services and hold legislative elections,” Gammanpila, of the Pivithuru Hela Urumaya party, wrote on Twitter. “People should decide their next leaders, not just anyone else.”

Sajith Premadasa, leader of Sri Lanka’s main opposition, rejected Rajapaksa’s offer to form a unity government. “It is a crooked and corrupt government that has brought the people to their knees. The demand of the people is that a government like this must go home immediately,” he said in a video statement.

“THIS GOVERNMENT IS OVER”

The developments come after the president declared a state of emergency on Friday, following street protests in the island nation of 22 million people.

The electricity regulator said daily power cuts would be reduced to 6.5 hours for the rest of the week, from around seven hours now, after the Department of Energy pledged to release 26,000 tonnes of diesel and fuel oil for several power stations.

“This cabinet change is meant to deceive people,” Nakandala, a marketing executive, said at a protest in Colombo. “This government is over. Rajapaksas can no longer save this by playing musical chairs.”

Sri Lanka, off the southern tip of India, is also struggling with runaway inflation after the government devalued its currency sharply last month ahead of talks with the IMF.

Sri Lanka’s expenditure has exceeded its income under successive governments while its production of tradable goods and services has been insufficient. The twin deficits have been severely exposed by the COVID-19 pandemic which has crippled tourism, its economic mainstay.